Shujaat Saudagar’s directorial venture Rock On 2 could not make an impact on the audience. The film received average reviews. The movie collected Rs. 2.02 crores on Friday, Rs. 2.41 crores on Saturday and Rs. 2.58 crores on Sunday. Hence, the total first weekend box-office collection of the film stands at Rs. 7.01 crores at the domestic front. Rock On 2 stars Farhan Akhtar, Shraddha Kapoor, Arjun Rampal, Purab Kohli and Prachi Desai among others. The musical drama has been produced by Farhan and Ritesh Sidhwani. 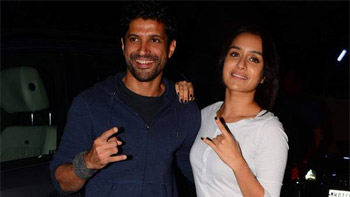 Special screening of Rock On 2 for Bollywood Rock On 2 team supports the effort to eradicate black money Rock On 2 cleared with a minor change, receives 'UA' certificate! Rock On 2 stars on promotion spree