On December 29, Anant Ambani and Radhika Merchant exchanged vows. A lavish party was held by the Ambanis in Mumbai, and several Bollywood celebrities were there.

The Ambani family celebrated the engagement of their younger son Anant Ambani to his childhood sweetheart Radhika Merchant on Thursday at Antilia with the help of everyone from Shah Rukh Khan, Salman Khan, to Alia Bhatt and Ranbir Kapoor, Ranveer Singh and Janhvi Kapoor. Ranveer was observed wearing a blue and black ensemble, while Janhvi arrived wearing a pink saree.

Alia Bhatt and Ranbir Kapoor arrived for the engagement party in style first. Ayan Mukerji, a friend and filmmaker, was with the Brahmastra Jodi. While Alia turned eyeballs in a glittery sharara, Ranbir looked sharp in a black kurta pyjama and Nehru jacket.

Janhvi Kapoor arrived wearing a studded blouse and an ombre pink saree. On one side, she left her hair in loose curls. She saw her buddy Orhan Awatramani, who was also wearing a pink kurta pyjama, participating enthusiastically in the festivities.

OTHER CELEBS ALONG WITH RANVEER SINGH

In a black top, black slacks, a blue velvet blazer, and a black Beret, Ranveer Singh arrived in elegance. He finished off his appearance with a pair of brown shoes and a chain around his neck. Armaan Jain, a former actor, was also spotted with his wife, Anissa Malhotra. Along with her spouse, the actor Sagarika Ghosh, and former cricketer Zaheer Khan, they attended the event. Zaheer was wearing kurta pyjamas while she was dressed in a beige and white sharara suit.

Along with his manager Pooja Dadlani, Shah Rukh also arrived. He nevertheless made a clandestine entrance to avoid the photographers. Pooja was observed getting out of the vehicle to enter the location, but she later got back in to enter the building privately with Shah Rukh.

At the Shrinathji Temple in Nathdwara, Rajasthan, Anant Ambani and Radhika Merchant celebrated their marriage with a traditional Roka ceremony on Thursday. When the couple arrived in Antilia, they were given a lavish welcome. At the Ambani mansion, there was a flower display, and there were nagade, fireworks, and dhol beats at Worli Sea-Link. Radhika was wearing a pastel pink dress, while Anant was wearing a purple kurta pyjama and jacket. 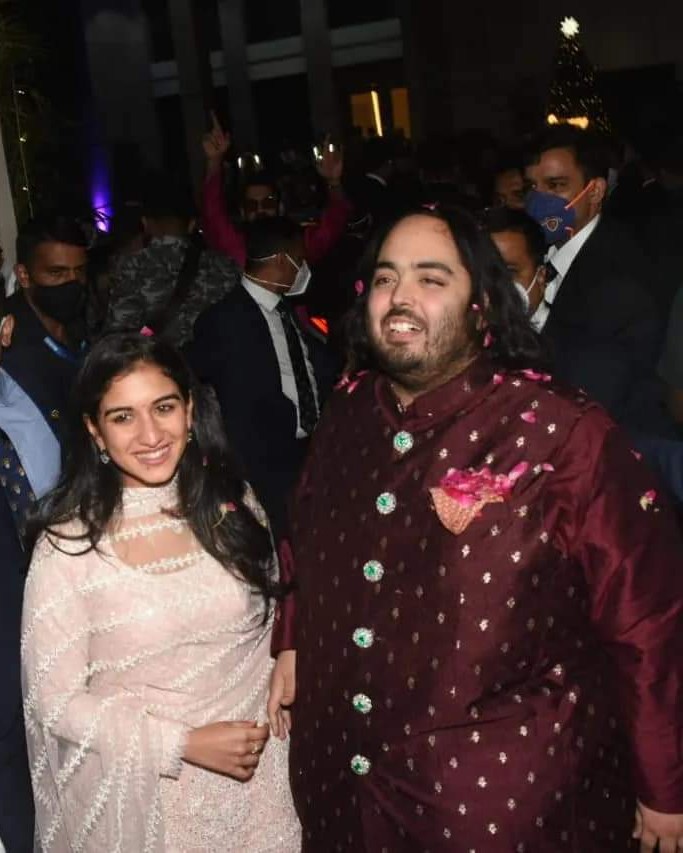