✕
✕
Your rating
Note: Click on the rating number you want to give for this movie.
BollywoodMDB
⟩
Bollywood News & Adda
⟩
Bollywood star Riteish Deshmukh is celebrating his 44th birthday; Here are noteworthy tips from his professional and personal life

Bollywood star Riteish Deshmukh is celebrating his 44th birthday; Here are noteworthy tips from his professional and personal life

Ritesh Deshmukh is celebrating his 44th birthday today. On account of that, here we will have his most noteworthy tips from his professional and personal life, making him different from others in the film industry.

Bollywood star Riteish Deshmukh has won the audience's hearts through his tremendous acting skills. He is mostly known for his comic timings, but he has proved to perform better in the negative character. He started his acting journey in 2003 and became one of the most loved actors in the industry. He never appears in any controversy until now. After getting successful as an actor, he made his debut as producer in 2013, and now he is set for hsi directorial release 'Ved.' Besides being a phenomenal actor, producer, and director, he has entertained his fans with adorable videos on his Instagram with his wife and friends. He keeps his audience engaged with so much versatility, making him diverse from others in the industry. Here we will have some noteworthy tips from his life.

1. Being a versatile actor:-

Despite his popularity as a comic actor, he has proved himself versatile. He has won the audience's hearts by working in the film like Tujhe Meri Kasam, Heyy Babyy, Masti, Kyaa Kool Hai Hum, Bluffmaster, Malamaal Weekly, Dhamaal, Housefull, Double Dhamaal, Housefull 2, Kyaa Super Kool Hain Hum, Grand Masti, Housefull 3, Total Dhamaal, Housefull 4, Baaghi 3. He has proved his versatility in his acting career by performing in several successful films. His performance in the romantic thriller, 'Ek Villain' has been acclaimed by critics and audiences. He was appreciated for his excellent acting performance.

2. His roots in political Family:-

3. Even though getting successful in Hindi films, he kept his foot in Marathi films:-

He has kept his foot in the Marathi industry by belonging to the Maharashtrian Family. As a producer, he made his debut with the film 'Balak Palak' in 2013. Even he has made an acting debut in the action film, 'Lai Bhaari,' which is the spiritual sequel of the Mauli. The film had gained him so much stardom in the film industry. His roots belong to the Marathi family, which he has proved through such an authentic and tremendous acting journey.

4. He is an Owner of an architectural firm as well:-

He always entertains the audience by sharing funny and romantic videos with his wife Genelia D'souza. The couple is one of the most popular and cutest couples trending on the internet. People tend to follow them by their charm and loving chemistry. Both have also started new plant-based proteins for vegan and vegetarian people, which have been followed and tested by themselves, which proves his social presence. The audience has always loved the couple.

All this quality of the actor makes him distinct from the others and the best person. His work in such successful films proves that he is a successful actor. He is making his debut as a producer and director; all of them were successful. This means he puts all his efforts to make it good at his level and is also loved by the audience. He did not cut off his roots from his Maharashtrian Family. Instead, he has kept his foot in it. Despite his political background, he has chased his dream and made everyone proud in his Family. 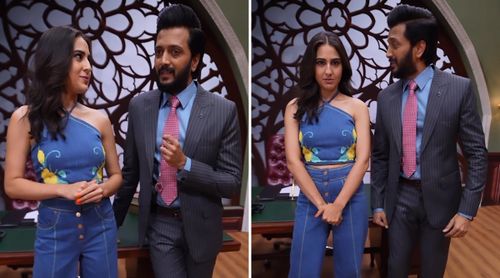