Sanjay Leela Bhansali, known for his out-of-the-box film experiences, has released his first-ever music album. The talented filmmaker released his first ever music album, ‘Sukoon’ on Wednesday. The album consists of nine beautiful tracks sung by some wonderful artists such as Armaan Malik, Papon, Pratibha Baghel, Shail Hada, Shreya Ghoshal, and Madhubanti Bagchi. It is streaming on many music streaming platforms.

Ranveer Singh has shown his support for the music album, ‘Sukoon’:-

Sanjay Leela Bhansali and Ranveer Singh have dropped three blockbuster films till now. This pair always collaborate to create one of the most magical performances on the screen. Therefore it is natural that the actor showers love on this filmmaker.

Actor Ranveer Singh has taken his Instagram and added a story to share a screenshot of him listening to the music album. He added a bunch of red heart emojis and showed his love for the music album. 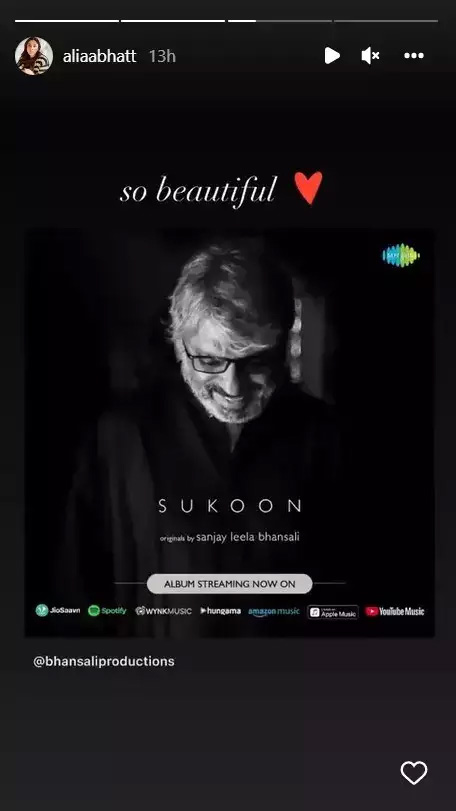 Sanjay Leela Bhansali announced the music album on Monday, titled ‘Sukoon,’ and released it on December 7. While speaking about the music album filmmaker said, “Two years in the making, during the difficult times of covid, I found peace, quiet, and love while creating Sukoon. I hope you feel the same while listening.” Rashmika Mandanna gets spotted stepping outside Sanjay Leela Bhansali’s office, a possibility of a new film?