✕
✕
Your rating
Note: Click on the rating number you want to give for this movie.
BollywoodMDB
⟩
Bollywood News & Adda
⟩
Happy Birthday Twinkle Khanna! Looking back at her greatest track hits on a special day!

To celebrate Twinkle Khanna's birthday, here is a look back at some of her best songs, from Humko Sirf Tumse Pyar Hai to Madhosh Dil Ki Dhadkan.

On December 29, Twinkle Khanna, an actress-turned-author, and her late superstar father, Rajesh Khanna, both celebrate their birthdays. She is Rajesh Khanna and Dimple Kapadia's eldest child. Twinkle has been portrayed in a variety of roles throughout her life, including that of an author, entrepreneur, homemaker, mother, and an actress.

Twinkle began her career in Bollywood, following in the footsteps of her parents, in 1995 with the release of the movie Barsaat, co-starring Bobby Deol. The movie was a success, and the actress even took up the Filmfare prize for the best female debut. She has appeared in numerous Bollywood movies, including Mela, Jab Pyaar Kisise Hota Hai, Itihaas, Jaan, and Dil Tera Diwana.

Twinkle left the film business and began a career in interior design after being married to actor Akshay Kumar on January 17, 2001. The actress transitioned to writing in 2015 when Mrs. Funnybones, her debut book, was released.

Here are some of the stunning mother-of-finest two's, tunes as she approaches another birthday:

Twinkle and Saif Ali Khan played the key characters in the 1999 film Mr. Aashiq, which also included a deep melody. Kumar Sanu sings the song, which was written by Indeevar.

One of Twinkle's best-known songs comes from her first movie, Barsaat, which starred Bobby Deol. You'll still want to coo along to this 1995 classic. Alka Yagnik and Kumar Sanu each contribute soulful vocals to the song, which also features lyrics written by Sameer.

This 1990s love ballad sung by Abhijeet & Alka Yagnik will still make you swoon. Both the music and the lyrics will uplift your spirits. Anu Malik is the song's composer. The song is from the Shahrukh Khan and Twinkle starrer Baadshah.

Twinkle and Salman Khan love song from the 1990s. The song features vocals by Lata Mangeshkar and Kumar Sanu, as well as lyrics by Anand Bakshi, and is everything you need to have the ideal evening.

Aamir Khan, Twinkle, and Faisal Khan are featured in this song from the movie Mela. Even though the movie didn't do well at the box office, many people enjoyed the song sung by Anuradha Paudwal and Udit Narayan. 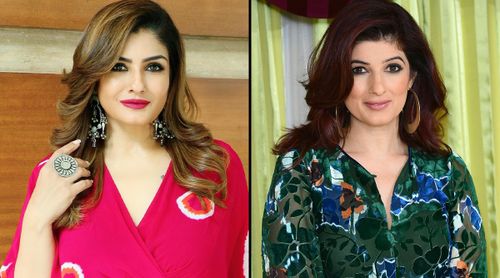