Priya Runchal took to Instagram to share an unseen photo of herself with John Abraham. On Sunday, the couple celebrated nine years of marriage.

John Abraham and his wife Priya Runchal are a very private couple. They hardly ever share a photo of themselves on social media with their admirers, but when they do, the pictures quickly go viral on the internet.

Priya took to Instagram on 5th June, 2022, to post a romantic photo with her handsome husband in honor of their wedding anniversary, and we can't get enough of the gorgeous duo.

Priya is pictured sitting on John's lap while they pose for the camera. She looked gorgeous in her yellow anarkali outfit, while John looked dashing as usual in his white shirt and blue jeans. The star wife captioned the photo with a yellow heart emoji on Instagram.

John and Priya married in a private ceremony in the United States in 2014. Only when the actor signed off as 'John and Priya Abraham' and wished his fans a happy New Year did fans learn about the wedding.

Priya, who works as an investment banker, has previously stated that she dislikes the paparazzi and prefers to be a private person.

Meanwhile, John was most recently seen in the film Attack, which also starred Jacqueline Fernandez and Rakul Preet Singh. He will be next seen in Ek Villain 2 and Pathaan. 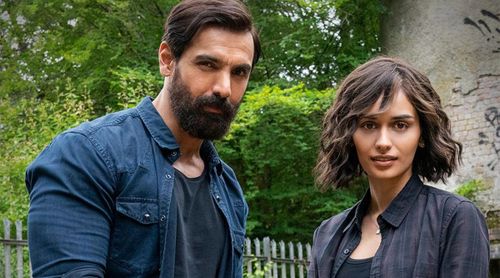