✕
✕
Your rating
Note: Click on the rating number you want to give for this movie.
BollywoodMDB
⟩
Bollywood News & Adda
⟩
Navya Naveli Nanda talks about not getting films so far; Check out more here!

Veteran actor Amitabh Bachchan's granddaughter Navya Naveli Nanda talked about, not surprisingly, not being part of any films. She mentioned her strength does not lie in acting, and she 'wouldn't be very good at it.' She discloses that she has not received any offer to act in films until. She said her forte lies in different things, and acting can never be her cup of tea. She is an entrepreneur by profession.

Check Out Navya Naveli Nanda's words on not getting film offers so far:-

In her recent conversation, Navya talked about why she does not choose acting as her profession, similar to her uncle, Abhishek Bachchan, and grandmother Jaya Bachchan. She replied, "I think I am just not very good at it, to be honest. I don't believe you should do something for the sake of doing it."

She mentioned that she did not have a passion and said, "You should do it if you are 100 percent passionate about it. It's not something I am passionate about. I think I am doing exactly what I love doing. I wouldn't be very good at it. I think my skill set lies elsewhere."

She revealed, "None. I don't know why people keep thinking that I have got film offers. None of them have come. Actually, it's surprising."

Earlier, also Navya said, "I enjoy dancing and things like that, but it was never something I took seriously that I would do this as a career. I was always more inclined toward business. My grandmother and aunt were both working women. They were also were involved in the family business in some capacity. My father and grandfather would take their opinion on it. That was always a world that excited me a lot more. I am also the fourth generation of the Nandas to take over that. I really wanted to carry that legacy forward, support my dad and everything that he is doing." 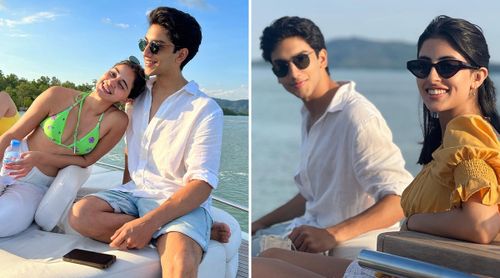