✕
✕
Your rating
Note: Click on the rating number you want to give for this movie.
BollywoodMDB
⟩
Bollywood News & Adda
⟩
Nimrat Kaur visits Gurdwara in Mumbai on the occasion of Guru Nanak Jayanti. See here for more!

Nimrat Kaur visits the gurdwara on the occasion of Guru Nanak Jayanti. She shared a glimpse of her visit on her Instagram handle. Check out for more!

Nimrat Kaur visits the Gurdwara in Mumbai, and she shared a glimpse of her visit on her Instagram by posting some pics. She shared some pics of having a peaceful visit to the Gurdwara. In one image, she looked like she was taking a Kada Prashad and shared a photo of her holding Kada Prashad in her hand.

In the Guru Da Langar, she took thali having puri, Kada Prashad, and sabji and bhaji in it. The actress shared a glimpse of her visit and having guru da langer at the gurdwara.

Nimrat Attire on this specials day:-

Nimrat wears an ethnic dress. She wore a plain powder blue color suit. Her matching bangles, bindi, and earrings enriched her looks so good that she looked amazing.

Nimrat's warm greeting to all:-

Nimrat also shared the arm greeting to everyone by saying Happy Gurupurab from her heart, home, and loved ones to others and their loved ones. She also thought of meditating on the guru's name, working hard, honestly, sharing, and consuming without discrimination. Again wishes everyone a happy Gurupurab.

Gurupuraqb is known as Guru Nanak Jayanti. The festival celebrates the joy of the birth of the first Guru of Sikhism named, Guru Nanak Dev. It is celebrated on the full moon date of Kartik Month or the Kartik Purnima every year. The same day is also celebrated as Prakash Utsav.

The early life of Nimrat Kaur:-

Nimrat Kaur is an Indian film actress who worked in Hindi films and American Television. She started her career as a print model, followed by acting in theatres. Nimrat appeared in a few Hindi films. She worked in Anurag Kashyap's production film Peddler. The film was screened at the 2012 Cannes Film Festival. 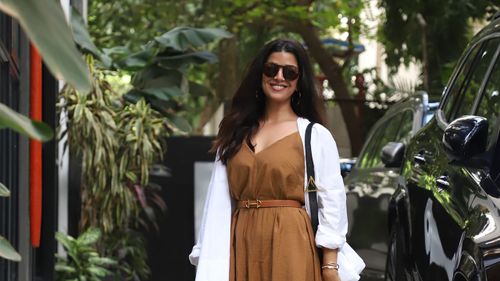 Nimrat Kaur: I tend to not worry about things that are beyond me Nimrat Kaur discusses her absence from Bollywood after the release of Airlift: 'I genuinely wanted to work...'