✕
✕
Your rating
Note: Click on the rating number you want to give for this movie.
BollywoodMDB
⟩
Bollywood News & Adda
⟩
Nushrratt Bharuccha starrer Janhit Mein Jaari to get a sequel

Nushrratt Bharuccha’s Chhori will also get a sequel

Janhit Mein Jaari (2022), a lighthearted comedy-drama starring Nushratt Bharuccha that tackles the social taboo around condoms, delivers on its promise to educate and entertain. The movie follows the journey of a young girl who decides to educate her family, in-laws, and society at large a valuable lesson by selling condoms for a living in spite of cultural opposition.

According to recent reports, the film's creators intend to release a sequel with a new, compelling topic of general interest.

The movie cost Rs 20 crore to make, not counting the cost of prints and global advertising, and has already made back Rs 23 crore from satellite, digital, and music rights. In addition, it received a subsidy of Rs 2 crore from the Madhya Pradesh government and over Rs 4 crore from ticket sales.

According to sources, a south production company has approached Bhanushali Studio Limited regarding remaking Janhit Mein Jaari in Tamil, Telugu, and Punjabi with an A-list female star in each language.

It's interesting to note that Janhit Mein Jaari is the third film of Nushrratt to get a sequel. Prior to that, a follow-up to Pyaar Ka Punchnama (2011) was released in 2015. Chhorii, a horror movie starring Bharuccha with a 2021 release, will have a sequel. 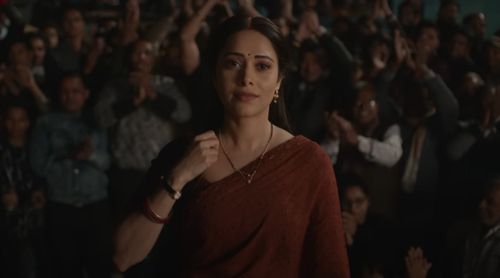