✕
✕
Your rating
Note: Click on the rating number you want to give for this movie.
BollywoodMDB
⟩
Bollywood News & Adda
⟩
Nushrratt Bharuccha starts filming for Selfiee in Bhopal

Actor Nushrratt Bharuccha, who was last seen in the horror film Chhorii (2021), has commenced shooting for her next project titled Selfiee (2023). The actor on Thursday reached Bhopal, where a major portion of the movie will be shot.

Selfiee, which also stars Akshay Kumar, Emraan Hashmi and Diana Penty, is being produced by Karan Johar’s Dharma Productions. The film marks the second collaboration of Nushrratt with director Raj A. Mehta. The duo had earlier worked together for the upcoming film Ram Setu (2022).

Sharing her excitement, Nushrratt said, “I am super excited to be a part of the Selfiee cast and looking forward to working on one more film with Akshay Sir… And that too, right after Ram Setu, which makes it even more special.”

"Of course, my director Raj Mehta, who I have last done Ajeeb Daastaans with, he is one crazy fun director! And him and Akshay sir on set, it will definitely be a laugh riot all day everyday! Selfiee is going to be one mad fun ride. I'm also really looking forward to working with Emraan sir and Diana. I've enjoyed watching their movies and am excited to be working with them on Selfiee," she added.

Selfiee is a remake of the 2019 Malayalam-language comedy film Driving License which starred Prithviraj Sukumaran and revolved around a superstar famous for his driving skills, who loses his license. 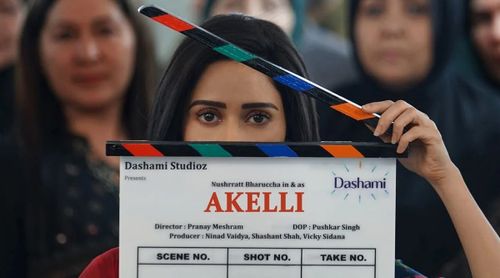