Priyanka Chopra updates her Instagram profile image to one of her holding her baby girl Malti Marie and it is the best thing you will see today.

You won't be let down if you count on Priyanka Chopra to consistently update her social media to please her followers. The actress, who has become a global phenomenon for a variety of reasons, frequently updates her social media accounts with information about her personal and professional lives. Today, her Instagram display picture rather than her IG Story or post is what grabs your attention.

Priyanka's Instagram feed, which has over 83 million followers, is a stop for all news about her, Nick Jonas, and their infant daughter Marie Malti Marie Jonas. On Tuesday, the actress pleasantly surprised her followers by unveiling her new Instagram profile photo. 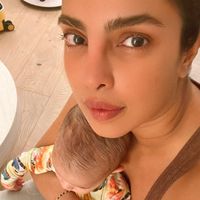 As her DP, Priyanka picked the most attractive image of her little daughter. In the aforementioned photo, Priyanka was occupied taking care of her daughter Malti while also attending to other motherly tasks. Without any makeup, Priyanka posed for the selfie and looked stunning. Fans could only see Priyanka's child in the Instagram DP, even though she is the main subject. Another image that Priyanka published on her Instagram Story showed a portion of the meeting between her daughter Malti and her brother Siddharth Chopra. Siddharth was seen holding baby Malti affectionately in the photo while the munchkin took in the beautiful scenery. Priyanka captioned the story photo after sharing it and became emotional:"Aww.. My heart." The actress shared yet another image on her Instagram Story in which she activated her silly mode. With a cap that read, "Student of the game being of the Earth," Priyanka took a selfie.

The actress will next appear in the critically acclaimed film Jee Le Zaraa, which also stars Katrina Kaif and Alia Bhatt in key parts.