Rashmika opened up about her difficulties in portraying the role of a visually impaired character in the film in a recent interview.

Rashmika Mandanna is the finest and most versatile actress in the film industry. She is ready to have a prolific year in the movies. She has four different language films in her kitty for this year. The first one is the OTT release ‘Mission Majnu’ in which she played the role of a visually impaired for the first time in her acting career and stars opposite Siddharth Malhotra in film. In a recent interview, she opened up about how difficult it was to portray the visually impaired character in her film.

Rashmika talks about the challenges she faced while working for such a character for the film:-

Rashmika took the challenge of playing the role of a visually impaired girl, which she never did in her acting career. It was a little difficult, but she did it well. She says, “As an actor, I have never done that. Again, this is a retro sort of film, so I had to wear those costumes and, at the same time, train for the visual aspect. I wondered how I would pull this off because it was new.”

Rashmika talks about the special training she has to undergo before performing on screen:-

Even before facing the camera, she has undergone certain training to know the body language and awareness that visually impaired individuals possess. She says, “I went through a couple weeks of taxing workshops. I used to have such bad headaches towards the end of it. They would blindfold you and throw tennis balls at you so that you had to sense where it was coming from. That was really painful and gruelling.”

It is a spy thriller film in which Shantanu Bagchi helms it. It has actors like Parmeet Sethi, Kumud Mishra, Rajit Kapur, Arjan Bajwa,Siddharth Malhotra, Rashmika Mandanna , and Sharib Hashmi. The film is set to be released on Netflix on January 20, 2023. Rashmika also has Animal, Varisu, and Pushpa: The Rise in her kitty, scheduled to release in 2023. 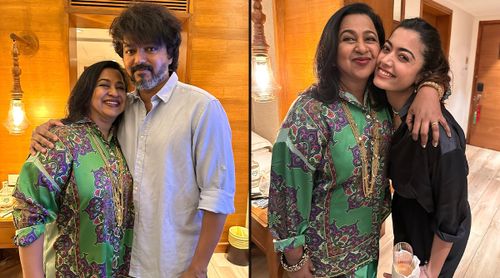