✕
✕
Your rating
Note: Click on the rating number you want to give for this movie.
BollywoodMDB
⟩
Bollywood News & Adda
⟩
Shilpa Shetty dances despite her injury; Raj Kundra and Shamita Shetty bid adieu to Bappa

Although Shilpa Shetty hurt her leg, the actress is still taking full use of Ganeshotsav despite the setback. In a recent video, the actress, who welcomed Bappa home for Ganesh Chaturthi, was seen dancing passionately as she said goodbye to Bappa. Shilpa Shetty may be seen entering the Ganpati visarjan in a wheelchair, followed by her mother Sunanda, husband Raj Kundra, son Viaan and sister Shamita Shetty. After that, the actress stood up and danced with Shamita joyfully. Shilpa Shetty and Raj Kundra may be seen performing the visarjan and immersing the Ganpati idol in another image. Raj wore an ethnic kurta with the same print, while Shilpa wore a yellow dress with a flower print. Shamita Shetty enjoyed dancing beside her sister and looked incredibly lovely in a pink sharara outfit.

Yesterday, Shilpa Shetty took to her Instagram account to share a video of her performing Ganesh aarti. The video looked at the décor, which was simply stunning. Shilpa Shetty and her family were again seen wearing matching outfits, which looked oh-so-beautiful!

On the work front, Shilpa Shetty was last seen in Sabbir Khan’s Nikamma, which also starred Shirley Setia and Abhimanyu Dassani. She will next be seen in the movie Sukhee and the cop web series Indian Police Force. 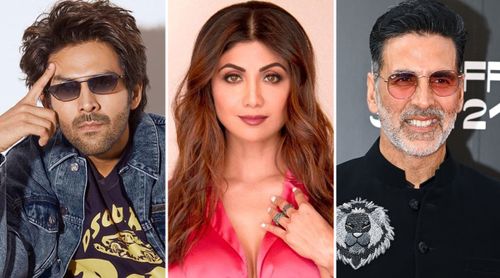