✕
✕
Your rating
Note: Click on the rating number you want to give for this movie.
BollywoodMDB
⟩
Bollywood News & Adda
⟩
The Archies will soon shoot a classroom-themed song by the end of July; Starring Suhana Khan, Agastya Nanda and Khushi Kapoor

The Archies will soon shoot a classroom-themed song by the end of July; Starring Suhana Khan, Agastya Nanda and Khushi Kapoor

Reportedly, Suhana Khan, Agastya Nanda and Khushi Kapoor will shoot a themed song in Mumbai for their debut ‘The Archies’

‘The Archies’ directed by Zoya Akhtar is in the pipeline. The director is at Mauritius on a recce. The cast on the other hand was in Ooty recently. According to reports, the team will be shooting in Mumbai for a song this July end. The themed song will have the leading cast Suhana Khan, Agastya Nanda and Khushi Kapoor.

Zoya Akhtar has brought in her favourite choreographers Bosco and Caesar. It would interest readers to know that Bosco and Caesar have choreographed many of Zoya’s hit songs like ‘Senorita’ from ‘Zindagi Na Milegi Dobara’. The song will be shot in a classroom setting with the stars sporting uniforms.

The shoot is said to take place in the suburbs of Goregaon. ‘The Archies’ team were rehearsing for the same in Ooty during the month of May. Amidst the Ooty schedule, Suhana Khan celebrated her 22nd birthday. 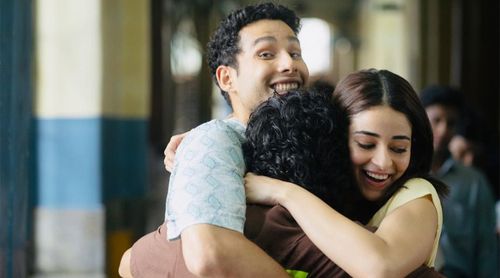