✕
✕
Your rating
Note: Click on the rating number you want to give for this movie.
BollywoodMDB
⟩
Bollywood News & Adda
⟩
The Peppa Pig family will have a live musical performance, and Bollywood mommies will grove with their children at the event. See more!

Recently Peppa Pig family had a musical performance in Mumbai, and several celebs joined the event. It will happen again, and Bollywood mommies will join with their kids.

The Peppa family has Peppa, George, Mummy pig and Daddy pig as their family members. This family will have a live musical performance as they did earlier in Mumbai, where several B- town celebs have joined the event, such as Kareena Kapoor Khan, Genelia D'Souza, Ritesh Deshmukh along with their children.

Soha Ali Khan and Neha Dhupia are mums who have cheered for the 'Peppa Pig' children's show, one of the famous British animated children's shows. It completed its first live performance in Mumbai on Sunday, and several Bollywood mommies attended. And have cheered the show as well. The show is now headed for its national tour to cover Chandigarh, New Delhi, and Bengaluru.

'Peppa Pig' is one of the popular British animated shows apprehended by Astley Baker Davies. The show follows the story of Peppa pig, her family and friends. The show aired in 2004 and is now broadcast in around 180 countries. Several different performers have voiced the Peppa character.

Soha Ali Khan's daughter Inaaya loves the show and is a big fan of the show. She loves watching musical performances, also. Soha says her daughter likes Peppa pig toon. The toon is loved by our family too. The toon not only entertains the kids but also absorbs values into them. That's why she didn't miss the event, and Innaya also enjoyed the show with her friends. Neha also said she enjoyed the event watching the live performance. But she got most happy with her little one cheering and grooving. She mentioned that she had a good afternoon with the child. 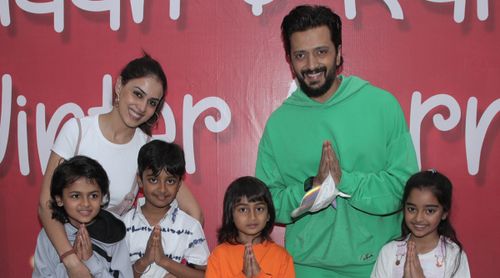