✕
✕
Your rating
Note: Click on the rating number you want to give for this movie.
BollywoodMDB
⟩
Bollywood News & Adda
⟩
Vidya Balan reacts to Ranveer Singh’s nude photoshoot controversy; her reply will win your heart!

After sharing his photos from the widely circulated nude photoshoot, actor Ranveer Singh sparked controversy. An FIR and a complaint have since been filed against the actor as a result.

Ranveer Singh's most recent nude photo shoot for a magazine cover stirred outrage across the country. While many people spoke out in his favour, others criticised him for doing the same. A complaint was lodged against the actor before the Maharashtra State Commission on Thursday, July 28. An FIR was previously lodged against the actor for "hurting sentiments of women.”

Vidya Balan has recently spoken out in favour of the actor, and her clever response will win hearts immediately. Recently, she was present at the Mumbai book launch of Kubbra Sait's biography, Open Book: No Quite a Memoir. The Kahaani (2012) actress was questioned about her response to Ranveer's controversial nude photo session during the media interview. She said, "What is the problem with that? This is the first time a man has done something like this. Let us also feast our eyes.”

In response to the FIR, she stated, "Maybe they don’t have much work to do and that’s why they are spending all their time on all this. If you don’t like it (the photographs) , close the paper, or throw it away, do what you want, why get into FIR ka chakkar?” 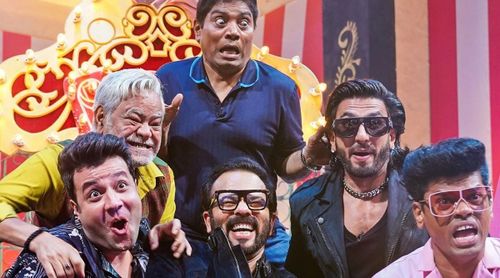