✕
✕
Your rating
Note: Click on the rating number you want to give for this movie.
BollywoodMDB
⟩
Fashion & LifeStyle
⟩
Alia Bhatt dons the all shades skin for the promotional event of RRR

The coming year brings some highly anticipated films featuring Alia Bhatt and the closest one is RRR which hits cinemas on 7th January, 2022. Alia Bhatt is an actress who possesses unparalleled acting prowess and leaves no stone unturned to explore the characters she plays. Her choice of films has surely put her on the map as one the finest actresses of the current generation of Bollywood.

Since the beginning of her career in the showbiz, Alia Bhatt has enjoyed much appreciation from fans and critics alike. Her fashion sense has always been top notch and it is getting better with every new designer that she gives the chance to dress her up.

The coming year brings some highly anticipated films featuring Bhatt and the closest one is RRR which releases on 7th January 2022.

The star-studded promotional event “Roar of RRR” took place recently in Mumbai. The evening was hosted by Karan Johar that witnessed the lead cast of the film alongside the special guest Salman Khan.

Alia Bhatt served the media and fans with her latest look that resonates with her character Sita in the film at the event as she posed for the camera with her co-stars Ram Charan and Jr. NTR.

Stylist Ami Patel dressed Alia Bhatt in a Sabyasachi creation that made her look prettier than ever. The skin toned beige lehenga bearing embellished details, paired with a strapped choli and a velvet drape to go with makes it the look of the evening.

The actress wore earrings from Sabyasachi’s heritage jewellery collection. The gaudy jhumkis match up the bling of embroidery on the drape.

Soft hair and makeup with a small teal green bindi which seems to be an Alia staple now, sealed the deal.

Release of RRR will be followed by Gangubai Kathiawadi and Darlings. She is also the leading lady of Dharma Productions’ Brahmastra and Rocky Aur Rani Ki Prem Kahani. 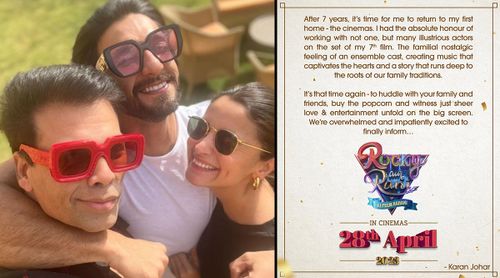