✕
✕
Your rating
Note: Click on the rating number you want to give for this movie.
BollywoodMDB
⟩
Fashion & LifeStyle
⟩
Hansika Motwani' princess look from her Ring ceremony; Check out!

Hansika Motwani' princess look from her Ring ceremony; Check out!

Hansika Motwani tied the knot with her long-term boyfriend and shared pictures from her wedding functions, but her royal princess look from the ring ceremony was eye captivating.

Hansika Motwani is the most popular and busiest actress in the South and Bollywood film industry. She decided to tie the knot with her boyfriend, Sohael Khaturiya. Sohael Khaturiya is her long-term friend and business partner of her. Both got married in the presence of family and friends in a Royal and dreamy wedding ceremony on December 4 2022, at the Mundota Fort and palace in Jaipur, Rajasthan. The actress shares every unseen glimpse of her marriage festivities, and fans cannot stop gushing over her look.

The actress has shared a glimpse of her every festivities as the ring ceremony. In the pictures, she is seen posing with her would-be husband, Sohael and family. They all look happier in the ceremony, which can be seen in the pictures.

Hansika has opted for a stunning peached-hued lehenga from Falguni Shane Peacock designer shelves. She was looking like a version to behold and admire it. Her lehenga featured embroidery all over it and was heavily embellished with the pink-hued sequin and stones to all over it. She has paired her cloth with a semi-sleeved matching choli with similar embroidery work. the blouse featured detailing of work on its hem. The overall lehenga look has raised the charm of the actress.

The jewellery opted for by the actress Hansika:-

She donned in the stone studded chakor necklace adorned with emerald beads. She has completed her look by adding matching earnings and maang teeka. She was seen flaunting her broad bracelet and unique mehendi design. She highlighted her cheeks, smokey eyes, nude lips and mascara-laden eyelashes. 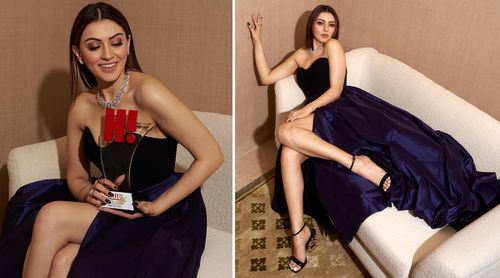 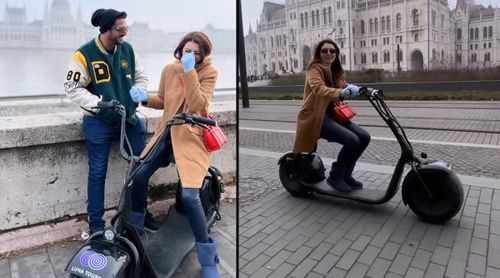 Hansika Motwani is riding an e- scooter in Vienna, enjoying it with her hubby Sohael Khaturiya; watch out, PICS!