✕
✕
Your rating
Note: Click on the rating number you want to give for this movie.
BollywoodMDB
⟩
Fashion & LifeStyle
⟩
Laxmi Raai sets the Gram on fire in a cut out floral co-ord set

Kannada actress Laxmi Raai is popularly known for her work in South movies. She is a fashionista who loves to take the fashion police by surprise with her bold and daring outfit choices. The Kanchana (2011) actress recently raised the temperature in a sultry co-ord set and left her fans jaw dropped.

She slipped into a blue and red tie-dye floral co-ord set which featured a cutout halter neck bralette paired with a strappy mini pencil skirt. Letting her outfit grab all the eyeballs, she skipped any accessories, She kept her makeup minimal and vibrant with foundation, filled-in brows, blushed cheeks and light crimson lipstick. Her blonde curly tresses were pulled up in a half up, half down hairdo. In the picture, she is seen playing with her curls and looking towards the side. Sharing the picture on Instagram, she captioned, "We cannot become what we want by remaining what we are."

Laxmi Raai recently featured in Mika Singh's new single Majnu 2. She featured alongside Mika Singh and Shama Sikander in the dance number. Sung by Mika Singh and composed by Shaarib Toshi, the lyrics of this love song are penned by Azeem Shirazi.

Mika Singh says “It’s an out and out groovy track which is surely going to be a part of every club’s party playlist. It’s a carefree sound. Just “letting all go” kind of vibe. I’ve given my best shot & made it sound as fresh & youthful” further adding “The fun we had filming this song; the energy is translated in the song which has added to the merriment on screen”.

Meanwhile, on the work front, Laxmi Raai was last seen in the 2021 Tamil movies Mirugaa and Cinderella. She will be next seen in Rani Ranamma, Jhansi IPS and Tipsy. 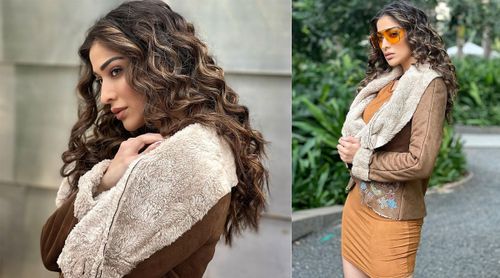