✕
✕
Your rating
Note: Click on the rating number you want to give for this movie.
BollywoodMDB
⟩
Fashion & LifeStyle
⟩
Suhana Khan shares throwback pictures with her girl gang, gets nostalgic about her college days

Suhana Khan shares throwback pictures with her girl gang, gets nostalgic about her college days

Suhana Khan, a starlet and aspiring actress, frequently posts joyful photos and videos from her life on Instagram, where she has a large fan base. Having said that, the young starlet recently went back in time to her undergraduate days. Sharing a series of pictures, she wrote, "Throwback to my college days".

Suhana appeared to be having fun with her buddies in the photos. She is wearing a checkered tank top in blue and yellow in the first photo. The beauty dressed down in a white shirt in the next photo. The Khan starlet looked gorgeous in another photo, wearing a satin brown outfit and flashing one of her finest smiles.

Suhana Khan has returned to Mumbai after finishing her studies at NYU's Tisch School of the Arts. SRK previously stated that if his daughter completes her studies and acting school, she may pursue a career in the film industry because she has an interest in it.

Suhana was recently seen visiting Zoya Akhtar's office. On the work front, it has been reported that Suhana would soon make her Bollywood debut in Zoya Akhtar's film. According to reports, it will be based on the Archie comics. The film will also feature Sridevi and Boney Kapoor's younger daughter Khushi Kapoor, as well as Amitabh Bachchan's grandson Agastya Nanda, according to sources.

Suhana Khan previously starred in a short film called The Grey Part of Blue (2019) for her college project, and her acting skills amazed everyone. 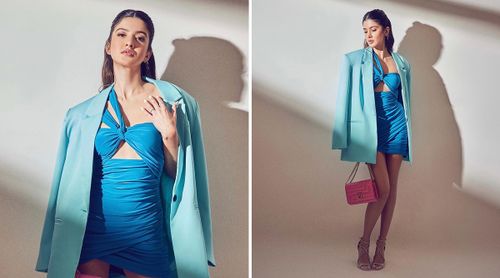