✕
✕
Your rating
Note: Click on the rating number you want to give for this movie.
BollywoodMDB
⟩
Fashion & LifeStyle
⟩
The 5 best dressed Hollywood stars from the Golden Globe 2023; Check Out Here PICS!

The Golden Globes returned this year at Beverly Hills, California, to honour the year's best film and television performances. Many Hollywood stars appeared on the red carpet, attracting view er's attention. The stars have illustrated the start of awards season with traditional fascinating and fresh, innovative silhouettes. The most feminine styles have jaw-dropping hues, sequins or embellishments. Here is the 5 best dress from the 2023 Golden Globes.

1. Selena Gomez:- Global diva Selena Gomez is indisputably slaughtering the red carpet. The pop icon looks spectacular at the 2023 Golden Globes. She dressed in a strapless purple velvet Valentino gown paired with matching puff sleeves and a floor-sweeping train. She has accented her outfit with hanging diamond earrings, Santoni platform sandals, and rings, and she chose to have a high ponytail. 2. Rihanna:- Rihanna graced the gala event with her shimmering ensemble, which made headlines and stole the show. Rihanna was dressed in a black off-the-shoulder velvet gown with a voluminous statement jacket and accessorized herself with diamond jewellery. She chose a signature hairdo. Her black velvet Schiaparelli gown featured a plunging strapless neckline accentuating her decolletage. The gown has an assembled and draped design, a figure-hugging silhouette, and an irregular hem. The voluminous jacket she chooses to wear features statement sleeves and gloves. Rihanna accessorized her look with a knotted diamond choker necklace, exact match ear studs, an embellished clutch, and strappy peep-toe heels. She has a centre-parted hairdo, glossy pink lips, eye shadow, mascara on the lashes, on-fleek brows, blushed glowing skin, and a contoured face rounding off the glamorous look. 3. Jenna Ortega:- Jenna chose to wear a stunning designer Gucci dress, displaying off her abs. Her flowy frock dress throws the vibes off a 1970s Stevie Nicks with its flowing bell sleeves and pleated detail and has a great finishing off with a dramatic train. Her dress has features crisscrossed at the bust, establishing a wrap top with metal ring details and prominence to her toned midriff. Ortega kept her hair in a flipped-out, teased style and accessorized herself with dazzling Tiffany & Co. jewellery, having three diamond chokers, a directing diamond bracelet, and multiple rings and sparkling earrings. 4. Julia Garner:- Julia Garner wore a light pink gown with a crystal overlay featuring the straps with three layers of drapery down, increasing the length of the gown, making it look like a perfect beautiful mermaid. The crystal overlay skilfully dangles down from the straps, and a maximalist fashion edge is given by its bust style. Garner typically chooses darker colour schemes for her red carpet looks; this light pink dress is a softer approach to glamour for the star. Julia Garner transformed herself into a sleek pixie cut on the red carpet. She kept her makeup very neutral. The combination of her hair and makeup is a nice contrast to the glitz of her pink gown. She accessorized herself with crystal detailing on her gown with a long diamond necklace, simple diamond studs and a large diamond ring. 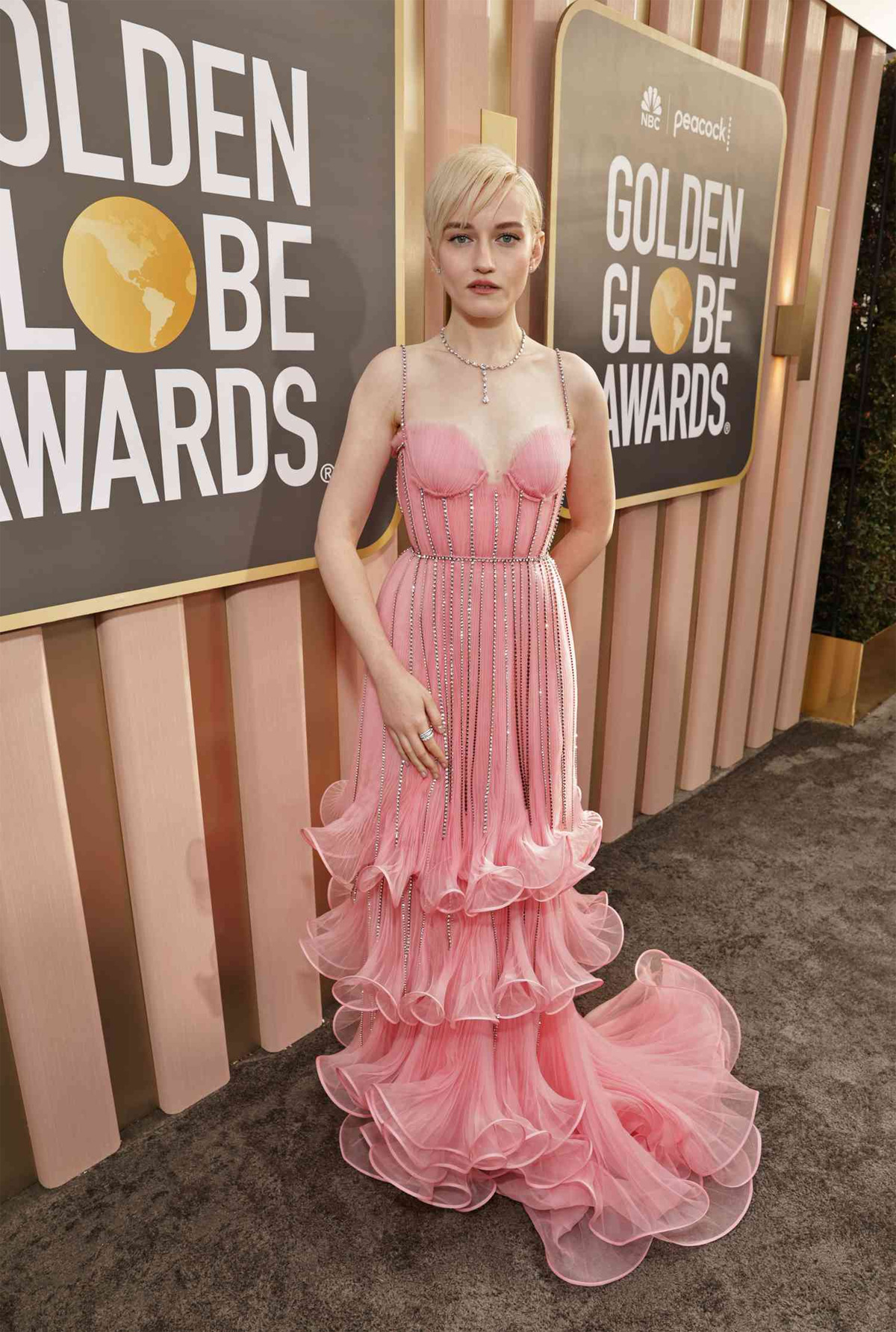 5. Heidi Klum:- Heidi Klum wore a silver cutout mini dress at Golden Globes 2023. She made headlines when she stepped out in a silver, purple, feathered Germanier mini dress. Plenty of things grabbed the attention of Klum's fit dress, including a mix of sparkles, feathers and cutouts and a built-in choker. She enhanced her look with jewels, a silver clutch and silver heels, along with her husband, Tom Kaulitz, as her date.