Harbhajan Singh and Geeta Basra tied the knot yesterday and their big fat Punjabi wedding became the talk of the town. The wedding happened in Jalandhar and it took place after a lot of dhamakedaar pre-wedding ceremonies like mehendi. Mika Singh and Gurdas Maan made the evening special during sangeet ceremony. The other people who drew attentions with their performances were Gurpreet Ghuggi and Harbhajan's cricketer friends like RP Singh and Parthiv Patel. Rahul Sharma and Sarandeep Singh also made their presence felt. There were Bollywood performances too at the occasion.

During jago ceremony, Bhajji's mother, sisters and other relatives performed some giddha and a decorated ghagra was carried by them and they took a round of the locality. A source said "There was a lot of halla gulla and dholis were called," A green Pathani suit suited well on Bhajji.

The wedding invitation card had a special entry pass to keep privacy. The bouncers were given T-shirts that had Harbhajan and Geeta penned on them.

The choora chadai ceremony took place at a resort and golden kaliren were attached to the bangles of the bride Geeta. 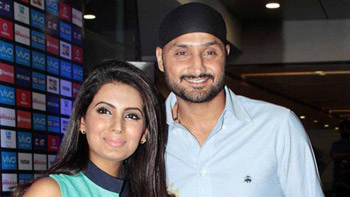 Mom-to-be Geeta Basra due to deliver by the end of this month! 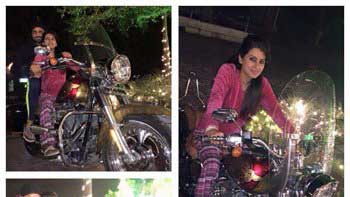