Shashi Kapoor, 79, passes away after prolonged battling from liver cirrhosis!

The legendary actor, Shashi Kapoor, took his last breath yesterday at a Kokilaben hospital in Mumbai.

It’s a sad news for the entire film fraternity. Yesterday, veteran film actor, Shashi Kapoor, passed away at the age of 79 in a Mumbai based hospital. The legendary actor took his last breath after prolonged battling from a chest infection, liver cirrhosis. His nephew, Randhir Kapoor, who states that the actor was suffering from kidney failure, confirmed the news to PTI, "Yes, he has passed away. He had kidney problem for several years. He was on dialysis for several years." The late actor was full of life and when he was asked by a leading daily if he was afraid of death, the humble star revealed, "Not really. I am a fatalist. All Kapoors are fatalistic. I take life as it comes."

Shashi Kapoor, who was born and raised in Mumbai and married an English actress, Jennifer Kendal. The two met as theatre actors in Calcutta in 1956 and got married in 1958. Jennifer was diagnosed with terminal colon cancer in 1982 and died of the disease in 1984. It is believed that the death of his wife put Shashi in depression and loneliness. Shashi is survived by two sons, Kunal and Karan, and a daughter, Sanjana, who takes care of the Prithvi Theatre.

He was the third and youngest son of legendary Prithviraj Kapoor. Made his film debut way back in 1940’s as a child artist, Kapoor then appeared in a total of 116 full-fledged feature films. Apart from Hindi films, Kapoor is considered as the first international star of India as he started appearing in English language films since 1961. His noteworthy films include ‘Deewar’, ‘Namak Halal’, ‘Satyam Shivam Sundaram’, ‘Kaala Patthar’, ‘Dharma Putra’, ‘Awaara’ and ‘Kabhie Kabhie’. He last appeared in an English film, ‘Side Streets’.

Coming from the family of great actors, known as the Kapoor Dynasty, Shashi was actor, director, and producer as well. He not only appeared in Hindi and English films but also in several other language films. He even directed a Russian film in 1988. Worked for more than 5 decades, the legend is still remembered for his dialogue, ‘Mere Paas Maa Hain’.

The entire film industry rushed to his home after the news confirmed, and many actors expressed their condolences via Twitter.

We are sad by the demise of the LEGEND, deep condolence from BollywoodMDB to Shashi Kapoor’s family. 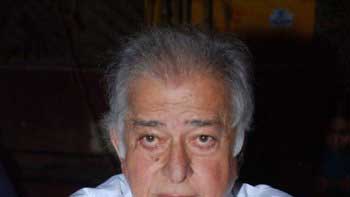