The makers of upcoming film Parmanu: The Story Of Pokhran rolls out to new posters.

Starring John Abraham, Diana Penty and Boman Irani in important roles, the upcoming film Parmanu: The Story Of Pokhran has been in the news ever since the project was announced a couple of months back. To pique the curiosity of the audience further, the makers keep unveiling some amazing posters giving us a sneak peek into the world of Parmanu. Continuing the same, team Parmanu has once again released two intense posters of the film. While one poster has John Abraham, dressed in army uniform, emerging out from the cloud of dust suspended in the air, the second poster features leading lady Diana almost in an identical manner, appearing from the cloud of dust that hangs in the air.

The audience is waiting for the release of the movie with bated breath, which is a based on the real story of the nuclear bomb test explosions carried out by India at the Indian Army's Pokhran Test Range in the year of 1998.

Directed by Abhishek Sharma, who has previously helmed Tere Bin Laden, Parmanu: The Story Of Pokhran has been shot in Jaisalmer, Rajasthan and few other important locations. The film is being produced by Kriarj Entertainment, JA Entertainment, Zee Studios, and KYTA Productions. It is slated to release on 8th December 2017. 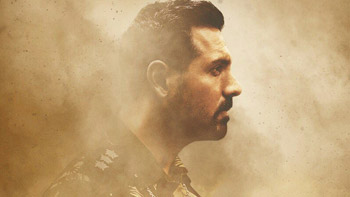