✕
✕
Your rating
Note: Click on the rating number you want to give for this movie.
BollywoodMDB
⟩
South News & Adda
⟩
Disha Patani kickstarts shooting for Suriya 42 in Goa; posts a picture to share the news

Disha Patani kickstarts shooting for Suriya 42 in Goa; posts a picture to share the news

Bollywood’s sizzling Diva has been roped in to play the female protagonist opposite Suriya in his upcoming film which is tentatively titled Suriya42.

In the upcoming tentatively titled movie "Suriya 42, Director Siruthai Siva and Suriya collaborated for the first time. The eagerly anticipated production is supposedly a fantasy period piece in which the actor plays five different roles. The crew flew to Goa to continue filming after beginning last month in Chennai. Bollywood actress Disha Patani is set to mark her Kollywood debut with this film as she will be playing the female lead. The actress has now arrived on location for a Goa shoot. She has started filming for the recurring movie, which will take place in Goa for one month. On her Instagram account, the actress also posted glances from the sets.

Disha Patani joins the sets of Suriya 42 in Goa

Sharing a picture from the shoot, Disha wrote the caption, "#Suriya42 day 1 (sic)." In her collaboration with Suriya in the film, Disha had earlier shared her excitement by saying, "I am super kicked to announce my next with Suriya sir and Sivasir. It feels great to be a part of such a huge project that has got all the larger-than-life elements for the audience to experience on the big screen.Moreover, the character that I am playing is also quite unique and I am also excited to bring my never-seen-before avatar to the audience.” With 200+ stunt performers, the producers are filming an action sequence in Goa over the course of 40–45 days. Redin Kingsley, Anand Raj, and Ravi Raghavendra are also in the cast, and yesterday saw the beginning of filming for Kovai Sarala and Yogi Babu's respective scenes. The movie will be released in 10 different languages and will be in 3D, according to the producers. The pan-Indian initiative is funded by UV Creations, and Devi Sri Prasad is in charge of the music. 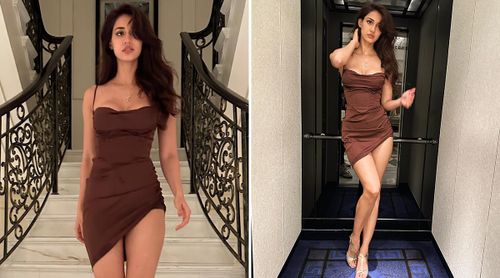