✕
✕
Your rating
Note: Click on the rating number you want to give for this movie.
BollywoodMDB
⟩
South News & Adda
⟩
Sarkaru Vaari Paata FDFS : Mahesh Babu’s wife Namrata arrives at the theatre for the morning show

Mahesh Babu’s wife Namrata arrived at the theatre to watch the film on the first day first show.

Sarkaru Vaari Paata has finally hit the theatres and the actor’s wife Namrata Shirodkar was spotted among his lakhs of fans who went to theatre to watch the first day first show of the film. Namrata was accompanied with her sister at the cinema hall and we are certainly sure that the former actress has loved the film by looking at her bright smile.

Fans too are going to the theatres to watch the film. The excitement of fans is totally justified as they will be witnessing the magic of the superstar on big screens after two years due to pandemic.

Not just that, the celebrations at the theatre was a sight to watch. Mahesh Babu’s hard core admirers celebrated the release of Sarkaru Vaari Paata’ by bursting crackers outside the theatres. Following the celebration videos are going viral on the internet and the film has been creating a lot of buzz on its first day of release.

For the unversed, SVP has been released in over 603 locations in the United States. While speaking of the shows in India, the early morning show began at 4 am at Chennai’s Rohini Silver Screens while the shows in other parts of the country started from 6 am onwards.

This One Incident Changed Fate of this Theater. ???? Sangam Sarat Theater - #Vizag Mahesh Babu IS the poolside view; flaunts his chiselled self in new photos at the pool 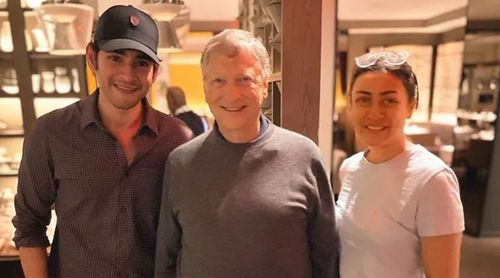