Mrunal Thakur is all set to make her debut in South with Sita Ramam opposite Dulquer Salmaan.

Sita Ramam, one of the most anticipated films of Dulquer Salmaan, Rashmika Mandanna, and Mrunal Thakur has finally got its release date. The romantic drama is slated to release on August 5 this year. Salmaan, the heartthrob of million hearts, took to his IG handle and officially announced the release date of the film.

Taking to his Instagram handle, Dulquer Salmaan wrote, "An epic story. A film that felt like we stepped into a dream. Time travelling to a glorious era rich in colours, sights and sounds. This is a love letter from the pages of history delivering soon to theatres near you…#SitaRamam." The actor also unveiled the new poster along with the release date.

Helmed by director Hanu Raghavapudi, the romantic drama is set against the backdrop of a war. The story of the film showcases Dulquer Salmaan as a soldier and Mrunal Thakur is seen playing his ladylove. While Rashmika Mandanna will be playing a cameo as Afreen in Sita Ramam.

Sita Ramam is simultaneously shot in Telugu, Tamil and Malayalam languages. PS Vinod is the cinematographer of the film whereas Vishal Chandrasekhar is rendering the music 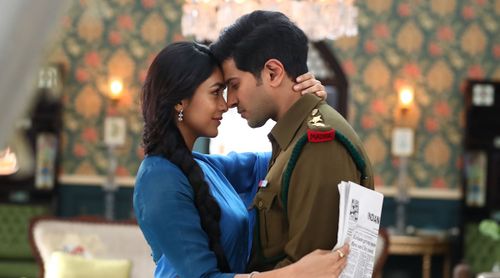