Actress Tunisha Sharma committed suicide at her Television show set, and recently her co-star Sheezan Khan got arrested for abetment of suicide.

Television Actress Tunisha Sharma died because of suicide on Saturday. She committed suicide on the set of the Television show. Her co-actor Sheezan khan was arrested after her mother filed a case of abetment against him. Tunisia and Sheezan were working on their television show, 'Ali Baba-Dastaan-e-Kabul.'

Waliv Police has arrested the actress co-star Tunisha Sharma's co-star Sheezan Khan, after registering the case of abetment to suicide. Police have registered the case under section 306 of IPC. Police will be presenting actor Sheezan to the court on Monday. There are no evidential details found behind Tunisha's suicide.

Tunisha has portrayed the role of Shehzaadi Mariam in the show, 'Ali Baba-Dastaan-e-Kabul', which streams on SAB TV. Sheezan worked earlier as Akbar in another show and is now featured in this show.

Waliv Police has told the news channel about the actress. According to them, they found her dead after they broke the toilet door on the sets of the TV show set. She went to the washroom after her tea break and did not return. There was no suicide note found at the crime scene. The cops investigate the case from both angles, like murder and suicide.

Tunisha shared a few posts just before her death. She shared a small video clip of her on her Instagram stories, where she was seen getting ready for her shot on the set of her shoot. She also shared a pic of herself and added the caption, "Those who are driven by their Passion Doesn't stop." 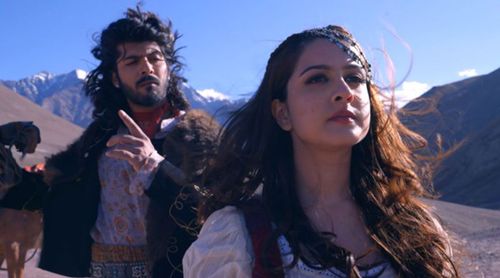