Bigg Boss 16: Sumbul Touqeer Khan's father claimed that she sees a "father figure" in Shalin Bhanot and that she cares about him.

According to Sumbul Touqeer Khan's father, the Bigg Boss 16 contestant cares about Shalin Bhanot but is not fixated on him. Tina claimed that Sumbul is fixated on Shalin shortly after the altercation between Shalin and MC Stan on Salman Khan's reality show last week. When Shalin was furious with Tina, she complained to Sumbul about how the latter capitalised on their arguments. Due to her affection for Sumbul, Tina added that he always puts them "in between."

Sumbul’s Father said she sees a ‘father figure’ in Shalin

Touqeer Hasan Khan, Sumbul's father, stated in an interview that his daughter isn't fixated on Shalin but rather is kind to him. Even Soundarya was keeping MC Stan back during the battle. Nobody noticed, but Sumbul suddenly gained attention.

He said, "Sab ek doosre ko kiss kar rahe hain, hug kar rahe hain, sab friends hain par agar Sumbul kare toh usko bola jaata hai (While everyone is hugging and kissing one another, Sumbul gets to hear what happens if she takes some action.) From the beginning, this has been taking place. Everyone is aware that they will generate more buzz if they target her more. She has turned into an easy mark.

He went so far as to say that Shalin served as a "father figure" to Sumbul because of "a few commonalities between Shalin and Sumbul, including sharing a birthday." As she did following Shalin and MC Stan's altercation, he added that Sumbul experienced "something comparable" to what he did five years prior.

Salman, the show's host, also discussed Sumbul's "obsession" with Shalin Bhanot during the weekend-themed programme. When Salman mentioned that, Sumbul started to cry. 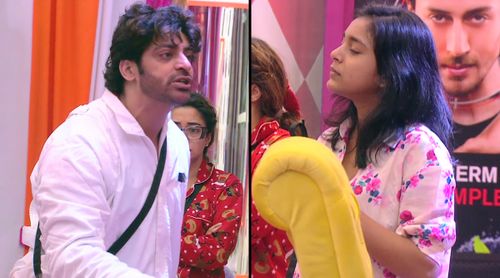