✕
✕
Your rating
Note: Click on the rating number you want to give for this movie.
BollywoodMDB
⟩
TV News & Adda
⟩
Divyanka Tripathi and Vivek Dahiya’s fans go ‘aww’ as the couple share a romantic video dancing to the beats of Shamshera’s Tera Fitoor

Divyanka Tripathi and Vivek Dahiya first met while filming Yeh Hai Mohabbatein, and they hit it off right away. Since their marriage in 2016, the pair has been living a happy life after first being friends, then falling in love, and then getting married. The couple has never shied away from expressing their love for each other on social media or in public appearances. They recently completed 6 years of their marriage and to celebrate it, they jetted off to the Maldives.

The couple previously posted cozy and romantic pictures of them from the vacation on their social media handle. Divyanka was also captured in a never seen avatar as she donned hot and classy looks on the beach. The couple recently posted a reel video from their trip featuring the popular song Tera Fitoor from Ranbir Kapoor's film Shamshera was recently shared by Divyanka Tripathi. She was caught taking pleasure in the windy conditions as she danced passionately with her partner Vivek Dahiya. The actress looks lovely in a tie-dyed kaftan-style dress in white and purple. She wore a big pearl ring with it, and it has lovely pearl work on the neckline. Vivek was wearing a white shirt and jeans. The actress captioned the video, “This weather calls for a romantic reel!”

Divyanka who was a part of the show Yeh Hai Mohabbatein for a long time was last seen on the reality stunt show Khatron Ke Khiladi 11. The actress was declared the first runner-up after losing to the winner of the show Arjun Bijlani. 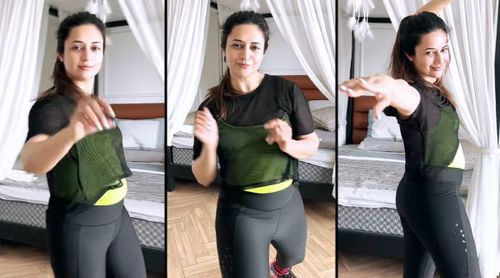