Karan Kundrra and Tejasswi Prakash are ready to tie the knot and are always seen together. She shared her video on her instagram story feeding Karan while he was driving a car.

Karan and Tejasswi developed feelings for each other in the reality show Bigg Boss''. They appeared together in the Bigg Boss 15 show. Even after getting out of the Bigg Boss house, they have seen each other, whereas Tejasswi won the show by beating every contestant from the house.

She appears very active on social media and constantly updates her fans by sharing pictures and masala with them. Recently she shared a story with her pics and videos. One video is about asking fans if they are watching the Nagin show where she has costumes of Nagin. In the last story, she shared a video where she feeds food to her boyfriend, Karan Kundrra.

She always mentioned that when he comes to pick you up with roti and Baigan ka bharta. Karan looks as handsome as ever but seems to be driving a car, and she is feeding him while driving because his hands are busy. Her gesture can resemble how keen she is in love with the star Karan Kundrra.

Karan Kundrra and Tejasswi Prakash shared their wedding plans. Tejasswi and Karan are always in the news for their appearance together. At the same time, Karan Kundra shared his family's reaction after seeing Tejasswi Prakash. His family thinks she is the heart of the family.

Recently this couple was seen together in one of the romantic music videos named Rula Deti Hai. The music video will be released earlier this month. She appears in the Nagin6 Show with co-actor Simba Nagpal. Tejasswi will be seen in a Marathi movie named 'Mann Kasturi Re'. the film is all set for release on November 4, 2022. The film is about two people decorating their dreams to fly high in the sky. She is working on another Marathi movie of hers. 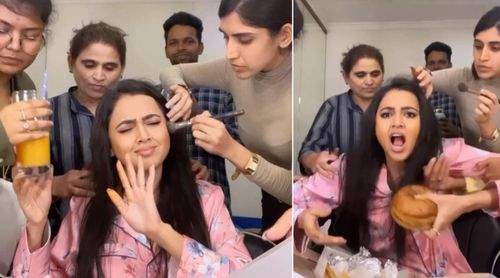