✕
✕
Your rating
Note: Click on the rating number you want to give for this movie.
BollywoodMDB
⟩
TV News & Adda
⟩
Jhalak Dikhhla Jaa 10: Rubina Dilaik says, ‘Dancing in front of Madhuri Dixit ma’am will be a new challenge for me’

Rubina Dilaik is currently featured as a contestant on the reality stunt show Khatron Ke Khiladi 12.

After a five-year hiatus, the popular celebrity dance reality show Jhalak Dikhhla Jaa will return to the TV screens. Since the producers made an official announcement about the comeback of this dance reality show, the fans have had a hard time maintaining their composure. Madhuri Dixit Nene, Nora Fatehi, and Karan Johar will serve as judges. Among many other contestants confirmed to be a part of the show, Big Boss 14 winner Rubina Dilaik is the latest one who will put on her dancing shoes on the show.

Rubina Dilaik is prepared to compete in this show after winning Bigg Boss 14 and having a successful run on Khatron Ke Khiladi 12. Rubina Dilaik stated that she was ready to tick the final reality show off her list, the dance competition Jhalak Dikhhla Jaa 10.

The Choti Bahu actress expressed her excitement saying, “And there cannot be a better platform than Jhalak Dikhhla Jaa. Being an actor, I’ve performed on screen before but dancing in front of the impeccable panel of judges and especially the queen of dance, Madhuri Dixit ma’am will be a new challenge for me, and I love challenging myself. I am eagerly looking forward to learning new dance styles and improving my dancing skills. I hope I continue to entertain my fans and well-wishers and live up to their expectations.” 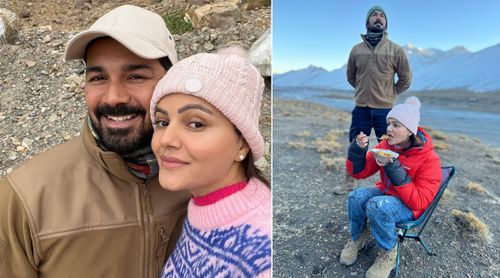 Here’s how Rubina Dilaik reacted to being called fragile!