✕
✕
Your rating
Note: Click on the rating number you want to give for this movie.
BollywoodMDB
⟩
TV News & Adda
⟩
Rubina & Sanam set the stage on fire in the 90s special episode of Jhalak Dikhhla Jaa 10; Watch the promo!

Rubina will recreate a special dance number of the 90s with choreographer Sanam in the upcoming episode of Jhalak Dikhhla Jaa 10.

One of the most popular dance reality television shows in India is Colors Tvs's Jhalak Dikhhla Jaa. The celebrity contestants and their choreographers put on spellbinding performances each week to get judges' points. Nora Fatehi, Karan Johar, and Madhuri Dixit are members of the esteemed judging panel. We are quite interested to watch how the contestants will do in the forthcoming JDLJ10 show, which will pay homage to the 1990s. This episode will become much more memorable when Ajay Devgn and Tabu arrive to promote their movie Drishyam 2.

On the song "Aankhon Se Tune Yeh Kya Keh Diya" from Ghulam, Rubina Dilaik does a sensual act. In the promo, she and her choreographer Sanam Johar can be seen having an electric chemistry that is electric. The two are seen dancing in the rain as well as shaking the floors with their routines. There is a moment in which Madhuri Dixit tells Rubina that she has fully absorbed the song. The caption of the promo of Rubina’s performance read, “Rubina ke dance moves lagayenge paani mein bhi aag in the 90's Special episode. Are you excited for it? Dekhiye #JhalakDikhhlaJaa har Sat-Sun, raat 8 baje, sirf #Colors par. Anytime on @voot”

We also witness the promos for every other contestant in addition to this. Gashmeer Mahajani honours Govinda by dancing to his smash hit song, "Meri Shirt Bhi Sexy." Additionally, Gunjan Sinha is seen dancing to the Bombay song "Hama Hama." Sriti Jha is also seen dancing to the Taal tune in the promo.

Watch the 90s special episode of Jhalak Dikhhla Jaa 10 today at 9:30 pm only on Colors TV. 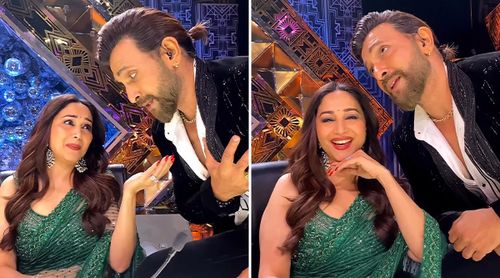