✕
✕
Your rating
Note: Click on the rating number you want to give for this movie.
BollywoodMDB
⟩
TV News & Adda
⟩
With 300 episodes of Bade Achhe Lagte Hain 2, Nakuul Mehta posts a message of gratitude

Nakuul Mehta is one of the most well-known performers in the television industry and has appeared in many famous programmes. The actor rose to fame with the programme Ishqbaaz, and at the moment he is starring in the hit programme Bade Achhe Lagte Hai 2 from Ekta Kapoor. He co-stars in the show with Disha Parmar as the actors Ram and Priya, respectively. Nakuul Mehta posted an appreciation message on social media after the show reached 300 episodes recently.

Disha Parmar and Nakuul Mehta collaborated on the fictitious series Bade Achhe Lagte Hai 2, which premiered on August 12th, 2021. When the show reached its one-year anniversary of airing a few months ago, the entire staff rejoiced. The programme has already broadcast 300 episodes, marking another milestone. The actor wrote in a message that on this special day,

“Tonight we play our 300th episode. Television can be relentless. You show up everyday with very little prep time. Driving to work is spent reading a long’sh screenplay for the given day. Dialogues are brewed fresh whilst you get your face pancaked. On most days you are multitasking & running or delegating errands cause life…You prepare as much as you can and then you leave it the universe that you show up with everything you got on the given day.. You find the ‘juice’ or clues everyday if you are open to receiving. From your audiences, from your own magic moments between action & cut, almost always from the written material & then mostly from the cast and crew you jam with..

When most of these elements align, its a gentle reminder that there’s so much to be grateful for.. 300 times love to our audiences who tune in every night, the amazing cast and crew who make the show what it is.. Most of them are silent workers you may never know off but god knows that I wouldn’t have had a shot at living this beauty if it wasn’t for the work they put it.. Indebted & grateful Also, see you tonight at 8!” 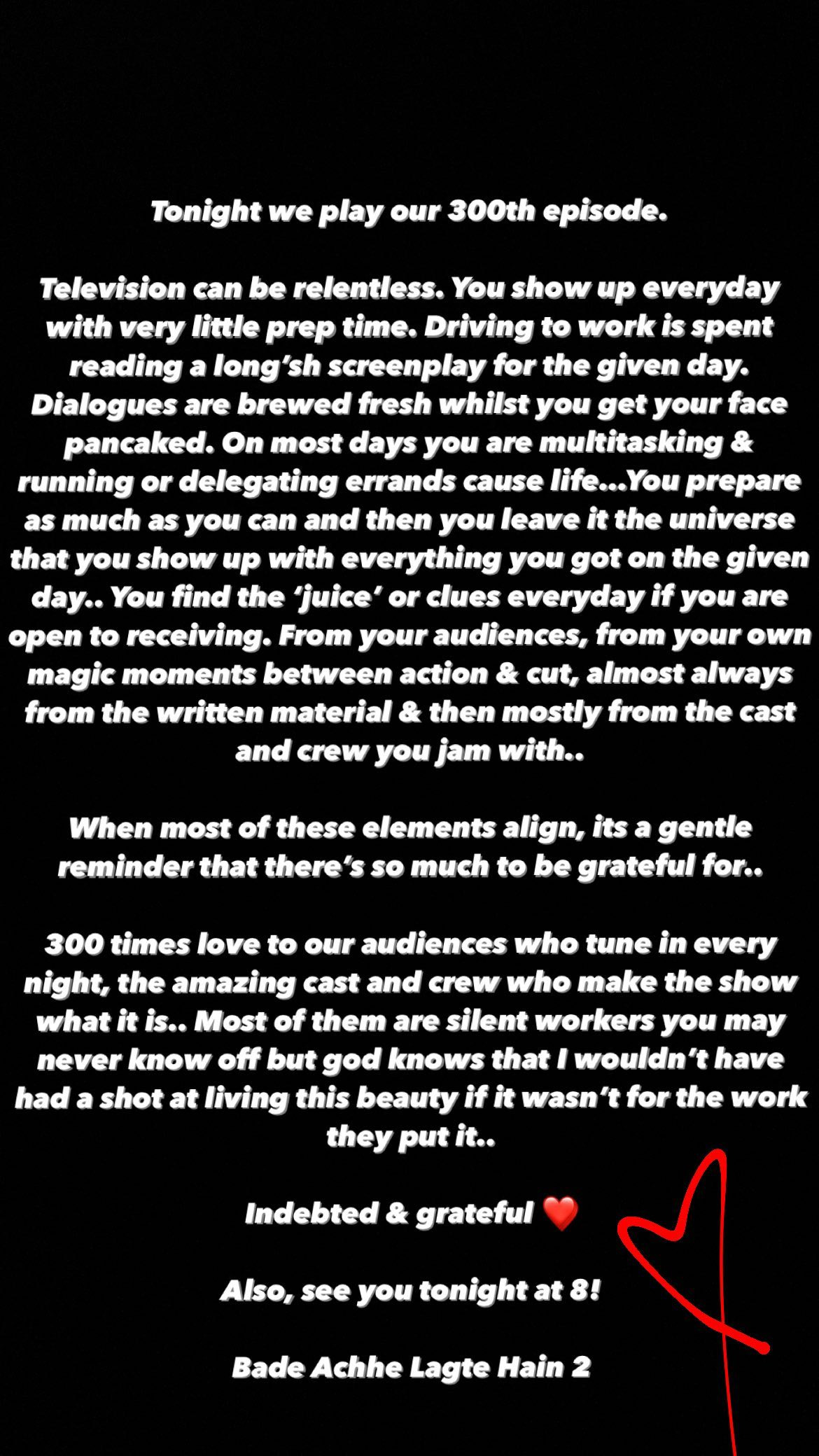 Many of the actor's friends and supporters congratulated him on the accomplishment in the comment area.

To another 300 Spartans, Karan V Grover commented. Meiyang Chang added, "You're motivating, Noxxxy guy," and Gajrajrao added, "Congratulations." Manya Singh remarked, "I am extremely lucky to be a part of this lovely exhibition........ Happpppppyyy 300.... Yayyyyyyyy," while Shubhaavi Choksey added, "for many, much more." Arjun Bijlani, Tahira Kashyap, and others used the emojis for "love" and "clap."

The television show Pyaar Ka Dard Hai Meetha Meetha Pyaara Pyaara was when actor Nakuul made his acting debut. He then made appearances on shows like Ishqbaaaz and India's Got Talent. Additionally, he has made appearances in web series including I Don't Watch TV and Never Kiss Your Best Friend seasons 1 and 2.

Pyaar Ka Dard Hai Meetha Meetha Pyaara Pyaara served as Disha Parmar's television acting debut. She then started working on the programme Woh Apna Sa and made guest appearances in other daily soaps. She is currently the lead in Bade Achhe Lagte Hain 2, a programme by Ekta Kapoor.