✕
✕
Your rating
Note: Click on the rating number you want to give for this movie.
BollywoodMDB
⟩
Web Series News & Adda
⟩
Comicstaan 3: Kusha Kapila opens up on receiving criticism as she joins the comedy show, and remembers people calling her ‘unfunny girl’

Season 3 of Amazon Prime Video’s Comicstaan will be hosted by Abish Mathew and Kusha Kapila.

Comicstaan's third season is about to premiere, this time with improved contestants, more attractions, and an outstanding mentor lineup. On July 15, eight new episodes of the cult comedy series will be released on Amazon Prime. And this time, a fresh format will be used to find India's next best stand-up comedian. With a lot of new features in the show, the newest addition is the Kusha Kapila. She will be taking us all on a fun ride with her co-host Abish Mathew.

On her Instagram account, Kusha had confirmed her debut as a host on Comicstaan. She mentioned that she had worked hard to prepare for the role and that she is aware that the audience is not used to viewing content creators in sacred comedy spaces. Talking about the flak that she received post her announcement as a host, she said, "We are creators now, so there's this joke that after 15 seconds we go (blank). First of all, it's 90 seconds now, so we speak for one and a half minutes. But Comicstaan is a long format show, so I just wanted to tell them that I have worked hard for it, it's not like we are just there. Creators get a lot of flak for going into the sacred comic space. This guy was like, 'how can she be the judge, how can you make her the judge, she doesn't know how to do anything, this unfunny girl.' Then I responded that 'no, I am just the host.' Then he was like 'oh then it's fine. All the best.'"

Further, she spoke about how the team of Comicstaan helped her prepare for the show. "You just need to understand why a certain joke is written and how it needs to be delivered. You need to intellectualize these things a little bit. You can't be like we'll wing it, not everything can be spontaneous," said Kusha.

Apart from her hosting in Comicstaan, the popular Instagram influencer is all set to make her acting debut in the Netflix show Masaba Masaba season 2. 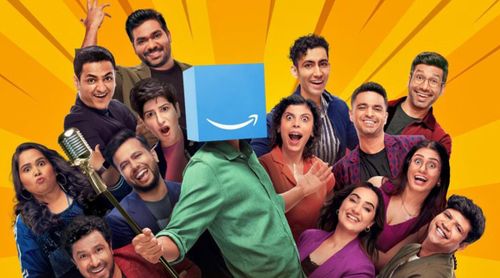