✕
✕
Your rating
Note: Click on the rating number you want to give for this movie.
BollywoodMDB
⟩
Web Series News & Adda
⟩
Raveena Tandon was first choice for Aarya before Sushmita Sen came onboard

Not Sushmita Sen, but Raveena Tandon was the first choice for Disney+ Hotstar’s Aarya.

Aarya (2020) is a crime-thriller streaming series on Disney+ Hotstar, co-created by Ram Madhvani and Sandeep Modi, who also directed the series, with Vinod Rawat serving as the co-director. The show is also the reason that brought Sushmita Sen back to the limelight. But according to a source, the show was first offered to Raveena Tandon.

A trusted source informed a publication that Aarya was first offered to Raveena Tandon, but after she declined the offer for reasons known only to her, the makers approached Sushmita Sen. The show then became a hit, thus bringing Sushmita back to the limelight.

The source said, "It is true. Netflix and Ram Madhvani wanted Raveena for Aarya. This was when the original script was converted from a feature film to a full-fledged web series. Kajol was to do Aarya as a feature film with Ajay Devgn as producer. Eventually, the project passed on from Kajol and Devgn to Netflix. Director Ram Madhvani and Netflix were keen on Raveena Tandon to play the protagonist Aarya Sareen."

The slick, nine-episode show tells the story of Aarya (Sushmita), who, due to unforeseen circumstances, changes gears from a mother to a don. As a fierce lioness, she does whatever it takes to save her children and family. Raveena Tandon at the red carpet for the NBT Awards 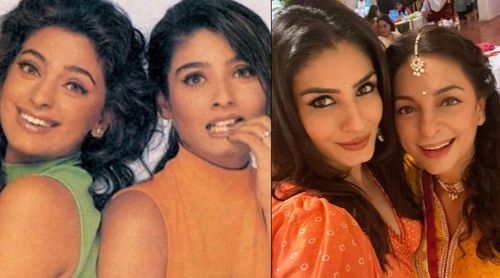