✕
✕
Your rating
Note: Click on the rating number you want to give for this movie.
BollywoodMDB
⟩
Web Series News & Adda
⟩
Shivangi Joshi and Tahir Raj Bhasin pair up for an upcoming music video

The upcoming music video has been composed by Amit Trivedi with lyrics provided by Raj Shekhar.

If you are excited to see the two actors together, wait just for a couple of days more as the music video will be out on April 19. It has been produced by VYRL Originals.

Meanwhile, the poster sees Joshi and Bhasin wearing casuals as the former places his right hand on the actress from behind and both hold each other's hands. Both have wide smiles on their faces and look adorably cute together. Joshi looks summer ready in that denim co-ord set while Bhasin is seen in denims paired with a white t-shirt and a checkered red and black shirt.

Amit Trivedi took to his Twitter handle and shared the poster. Check it out here:

Shivangi Joshi was most recently seen in Colors’ Balika Vadhu 2, which had to end its run prematurely due to plummeting ratings on the TRP charts. Tahir Raj Bhasin, on the other hand, has had back-to-back releases over the past few months, including such films as 83 (2021) and Looop Lapeta (2022), and streaming shows like Yeh Kaali Kaali Ankhein and Ranjish Hi Sahi. Shivangi Joshi recalls being mocked on the sets of her first show; reveals she was reduced to tears 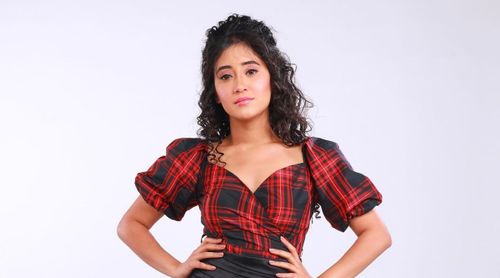