✕
✕
Your rating
Note: Click on the rating number you want to give for this movie.
BollywoodMDB
⟩
Bollywood News & Adda
⟩
Shilpa Shetty has no time for Sunny Deol starrer Apne’s sequel

Due to back-to-back assignments, Shilpa, who starred in Apne, will not be able to appear in the Sunny-led sequel.

Shilpa Shetty is taking a break from shooting Indian Police Force after the release of her film Nikamma (2022) over the weekend. Late next month, the actress will return to work on Rohit Shetty's web series, which also stars Sidharth Malhotra and Vivek Oberoi and marks her OTT debut. Shilpa is unable to be a part of Apne 2, which is yet go begin production, due to Amazon Prime Video taking up a large portion of her schedule.

The film is a sequel to Sunny Deol starrer Apne (2007). Shilpa Shetty portrayed Deol's love interest in the 2007 film. Director Anil Sharma was keen to cast her in the sequel to the family drama, which also stars Dharmendra, Bobby, and Karan Deol.

The Dhadkan (2000) actress was quoted saying to a news portal, “Anil sir did call me once. I don’t speak about films when I am not able to do them. I have a lot of respect for Sunny and Dharamji, and I respect Anil sir’s vision. But I am not able to fit [the film] in the scheme of things.”

Shilpa Shetty is nearing to complete three decades in the film industry. The actress had recently spoken about her long career in the profession. “There's a lot left to be done. I still feel like a newcomer in the industry,” said the actress. 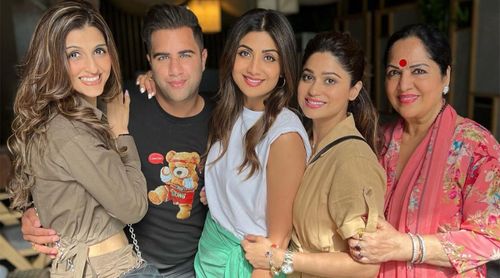